Letter from Charles Dickens discovered in the archives of the National Railway Museum.

A letter written by Charles Dickens in 1870 has sparked a fresh mystery: did the celebrated author spend his last Christmas without his prize turkey, thanks to a railway mishap?

The letter has been rediscovered in the archive of the National Railway Museum in York and responds to the Great Western Railway which accidentally set fire to a parcel containing a 30lb turkey destined for Dickens’ dinner table.

Find out more about the letter on our blog.

Dated two months after the incident, Dickens replies: ‘I have no doubt my Christmas fare was destroyed by an unavoidable accident, and that I bore the loss with unbroken good humour’.

In the Christmas week of 1869, a horsebox laden with parcels from the Hereford district caught fire near Hanwell Station destroying the contents. Mr Kingett from the Great Western Railway wrote to the senders, one of whom was Charles Dickens, to explain the circumstances and to apologise.

However, it is not known if Dickens ever found a replacement turkey for his Christmas dinner.

Ed Bartholomew, Lead Curator at the National Railway Museum, said: “Every now and then we are fortunate to uncover a hidden gem in our railway archive—which stretches back more than 200 years. Dickens played a key role in popularising the image of Christmas as we know it today, which included the then luxurious choice of turkey in A Christmas Carol, instead of the more traditional goose. The bleak irony of this discovery is that the man who did so much to shape our Christmas experiences may himself have been left with an empty stomach on his last ever Christmas day. Hard times indeed.”

Charles Dickens had a difficult relationship with the railways, having famously survived the Staplehurst rail crash of 1865 which killed ten people and injured 40. Charles was travelling with his mistress Ellen Ternan at the time of the crash when the train derailed while crossing a viaduct. He was badly affected by the incident and died five years to the day of the crash on 9 June 1870.

However, as one of the most famous celebrities of the Victorian era, the railways were a necessary means for Dickens to travel between speaking engagements and he would have regularly travelled by rail.

The full text of the letter reads: 'Sir, in reply to your letter I beg to say that I have no doubt my Christmas fare was destroyed by an unavoidable accident, and that I bore the loss with unbroken good humour towards the Great Western Railway Company. Faithfully Yours, Charles Dickens.' 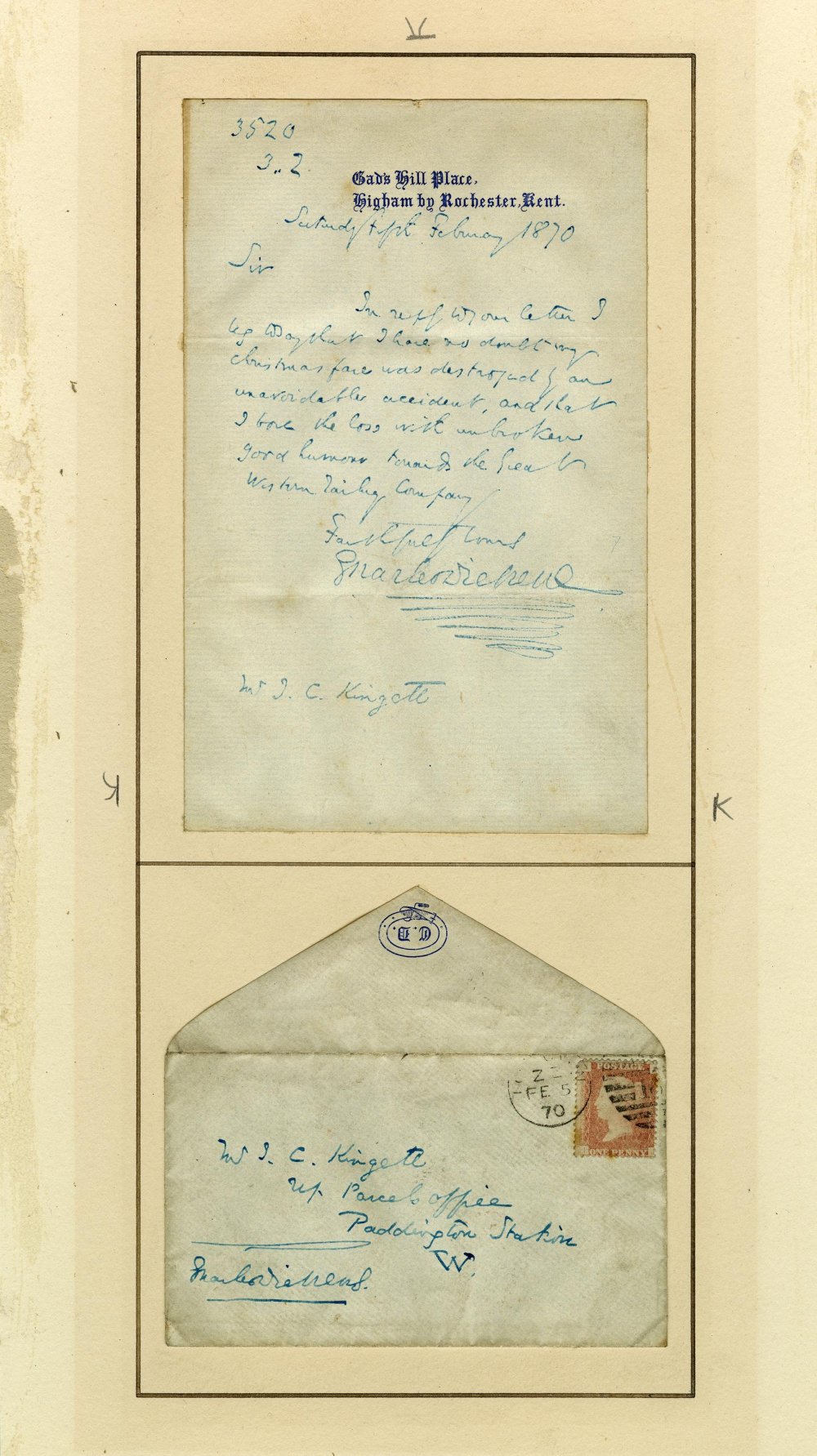 The letter is clearly signed by Charles Dickens and the envelope bears his stamp with the letters C.D. and was written only four months before his death on 9 June 1870.

The letter will now go on display in the National Railway Museum’s Highlights Gallery—just in time for Christmas.

Admission to the National Railway Museum is free, for more information visit: www.railwaymuseum.org.uk