The building will celebrate and showcase the latest developments in railway technology, provide a world-class visitor entrance and be an exemplar of low-carbon and sustainable architecture.

Feilden Fowles beat 75 other teams to the commission for the 4,500 sqm Central Hall. The competition jury, chaired by Dame Mary Archer, praised the winning team’s proposal for its elegant but functional design as well as its ambitious energy strategy.

Inspired by the site’s former use as working railway buildings, the designs featured in the proposal reference the history of locomotive ‘roundhouses’ with a central two-storey rotunda. Clad in recycled copper and featuring high, glazed ceilings with timber radials, the building will attract visitors approaching from the city centre and York Station. 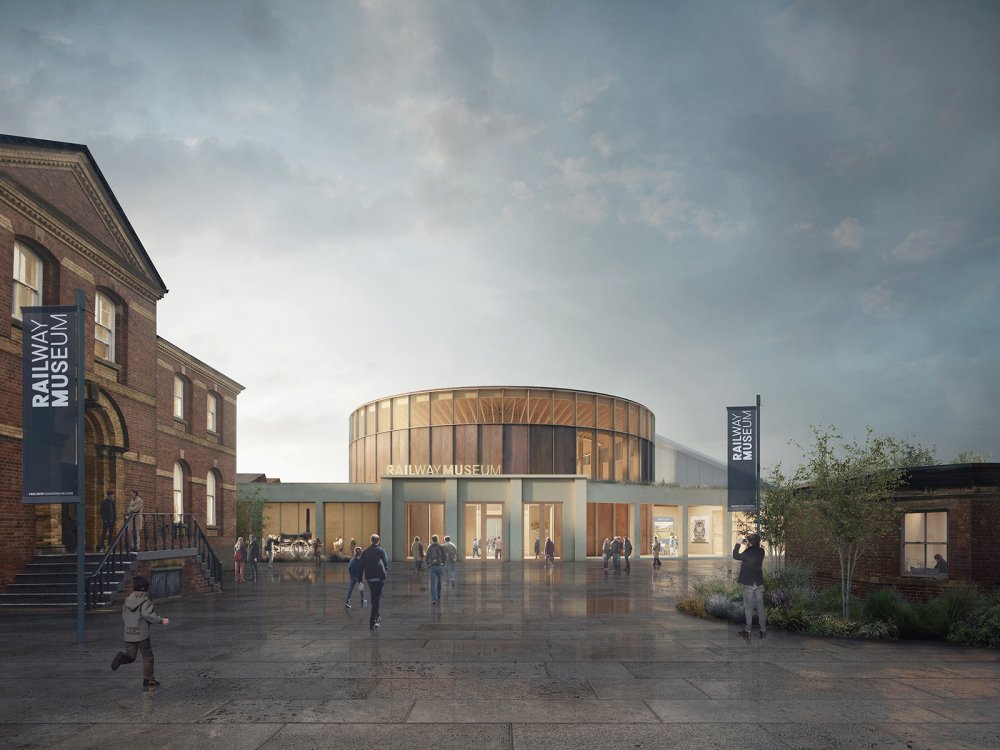 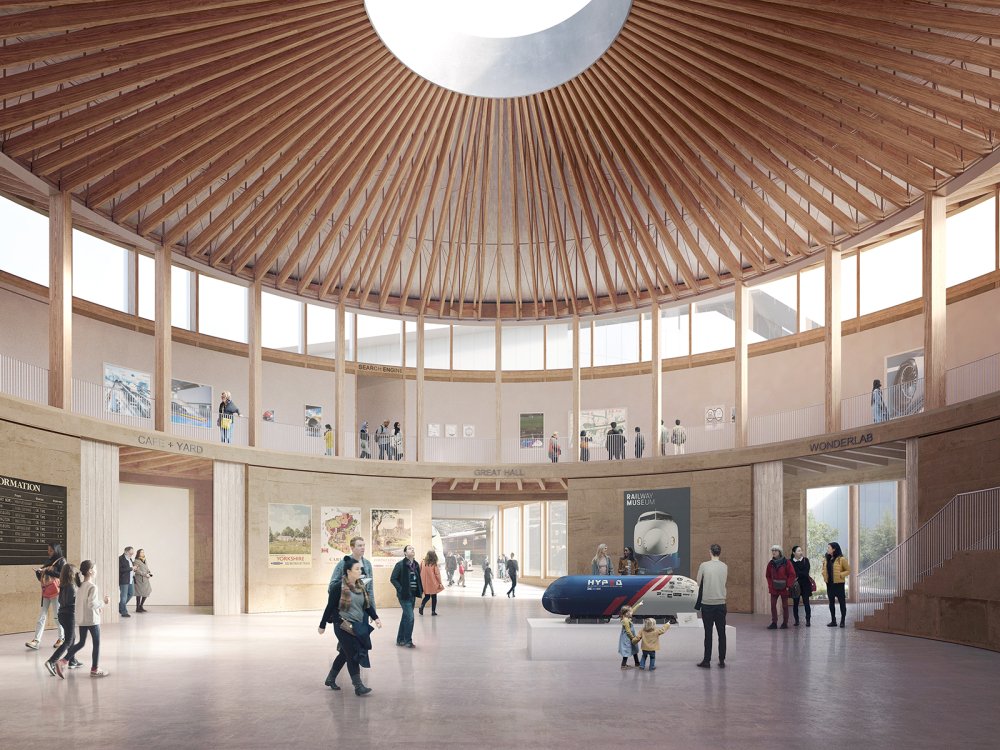 The proposal—which will be shaped by the museum and the winning team—dramatically reduces reliance on concrete and steel by creating a timber frame structure. A combination of passive design principles and active systems, including the use of recycled copper and local York stone, will reduce the site-wide operational carbon footprint by 80 per cent.

Central Hall will be the centrepiece of the museum’s transformational masterplan to create the ‘world’s railway museum’ and will include a spectacular 1,000 sqm gallery to showcase the future of railway technology.

“The winning design centres around a beautifully crafted timber frame rotunda which, through the use of recycled and locally sourced materials, will dramatically reduce the museum’s carbon footprint.

“Feilden Fowles demonstrated a real sensitivity to the site’s railway heritage and to the historic character of the city of York. The building will play a vital role in linking the museum and will provide a focal point for the wider York Central development. Thank you to everyone who shared their views online and at the museum. It gives us a real sense of the incredible enthusiasm the public have for our vision to become the world’s railway museum.”

The masterplan is the cultural anchor of York Central—one of the largest and most ambitious brownfield regeneration projects in Europe. York Central has received outline planning permission and received £77.1m of Government investment earlier this month. York Central will see the creation of a new park and green spaces as well as creating up to 2,500 new homes and an additional 6,500 new jobs.

Dame Mary Archer, Chair of the Board of Trustees, Science Museum Group and Chair of the Strategic Board, York Central, said:

“Whilst the unprecedented challenge of the coronavirus is dominating our lives, we all want to see hope and ambition beyond the present dangers. So we are holding steady with our ambition to make this the world’s greatest railway museum. If anything, the wider situation has strengthened the resolve of the Science Museum Group to move forward with our transformational plans for our five sites outside London, investing in a sustainable future and playing our part in keeping culture at the heart of our communities.”

“We’re thrilled to win this nationally significant competition. The brief combined three of our passions—museum architecture, great railway architecture of the 19th century and working in Yorkshire. Central Hall is both a tremendous challenge and a unique opportunity to create a new face and connected experience for the museum. We can’t wait to start work with such a fantastic client.”

The proposal also proved popular with the public, who were able to see the finalists’ schemes in a free exhibition at the museum and online gallery and add their comments.

Seventy-six teams comprising 241 firms from 19 countries entered the competition, which launched in September 2019.

The National Railway Museum is ranked amongst the most popular attractions in the UK and welcomes more than 700,000 visitors annually. Located close to the centre of York, the museum sits within a former industrial site that was originally developed in the mid- to late-19th century by the North Eastern Railway Company.

The competition was run by Malcolm Reading Consultants in accordance with EU procurement guidelines and UK Public Contracts Regulations 2015.

Seventy-six teams comprising 241 firms from 19 countries entered the competition, which launched in September 2019.

Feilden Fowles is an award-winning London-based architecture practice, founded in 2009 by Fergus Feilden and Edmund Fowles. The practice specialises in delivering socially and environmentally sustainable buildings across a variety of sectors and aims to make architecture that is rich in character and distinct in identity.

The projects often interpret historic, cultural or vernacular references to generate clear concepts with a legible diagram. Structural integrity and tectonic expression drive the detailed design process to deliver buildings that are at once robust and well-built. Built works to date include arts and cultural buildings, educational projects, heritage, workplace and residential.

The National Railway Museum in York has the largest collection of railway objects in the world and attracts more than 700,000 visitors per year. The collection includes over 260 locomotives and rolling stock, 600 coins and medals, as well as railway uniforms, equipment, documents, artwork and photographs.

Sustainability and the Science Museum Group

The Group pledged to plant 1,000 additional trees every year to 2030, to prioritise sustainability in masterplan projects planned for Manchester, Bradford and York and to further reduce carbon emissions.

In addition, carbon literacy training is to be provided for all colleagues, climate change will be the theme of the annual Manchester Science Festival and a new exhibition on carbon capture and storage will be created in London.

For more information about sustainability and the Science Museum Group, visit: www.sciencemuseumgroup.org.uk/category/sustainability/