Updates to the planning application for the National Railway Museum’s new Central Hall—part of its vision to become the cultural heart of York Central—have been submitted.

The updates to the planning application incorporate technical improvements to the proposed walking route through the museum which will now follow more closely the natural alignment of Leeman Road.

The plans seek to amend the original scheme for Central Hall which was submitted to City of York Council in December 2021.

It is anticipated that City of York Council will amend the existing Walkways Agreement between the Council and the museum to confirm this altered route, which will retain the previously agreed opening times.

Pedestrians and wheelchair users arriving from the station or Marble Arch wishing to pass through the site will cross the square in front of Central Hall, passing through the reception of Central Hall and exiting from the western doors. They will then reach the line of Leeman Road via steps or a ramp, before passing along the road to leave the museum site. 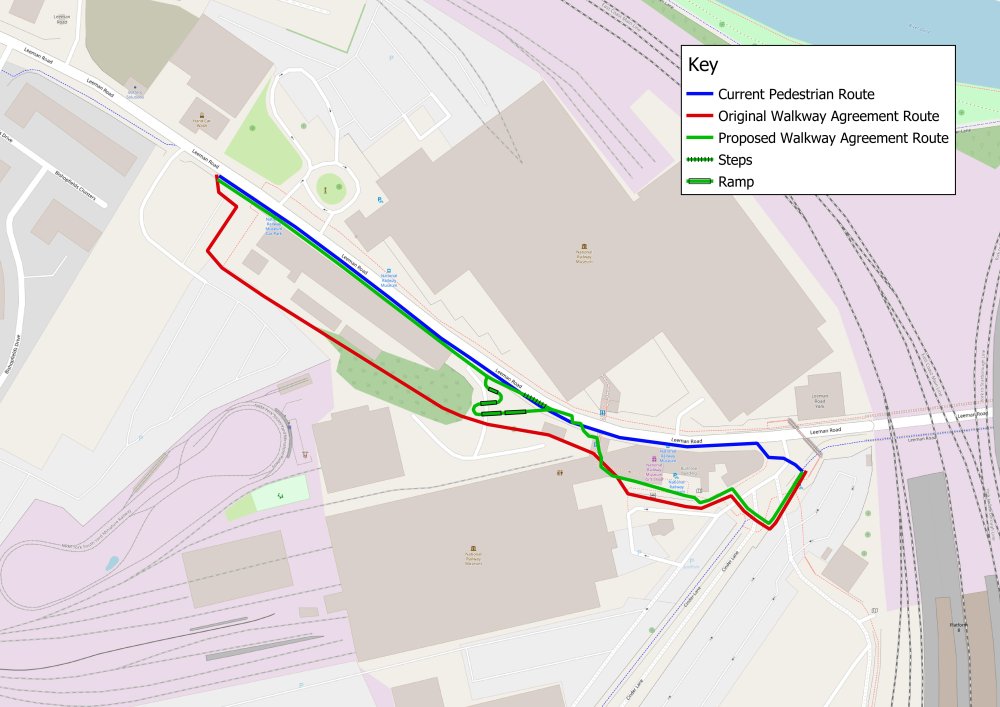 Following construction of Central Hall, there will be several options for pedestrians and cyclists to enter the city centre via the Leeman Road area, as agreed at outline planning consent and examined through the Stopping Up Order public inquiry process. This includes via the Walkways Agreement pedestrian route, and also via Foundry Way and Hudson Boulevard which would be open for public use 24 hours a day. This route will feature attractive landscaping and resting places as well as access to the new facilities and amenities to be developed as part of the York Central scheme. New bus stops would be created, including on Leeman Road, providing an option of bus travel via the new road route, as well as access for pedestrians and cyclists.

Central Hall is a new welcome space and gallery located between the museum’s Great Hall and Station Hall. It will unite the museum buildings and is a cornerstone of Vision 2025, the museum’s journey to transform its offer and become the World’s Railway Museum. This exciting vision also includes a new Wonderlab: The Bramall Gallery, aimed at inspiring children to think like engineers through experience, interactivity and play.

Judith McNicol, Director of the National Railway Museum, commented: “We have always been keen to ensure that the proposed pedestrian route through the museum provides a straightforward and sensible access solution for residents and visitors to the museum. The proposed amendments improve the route and allow it to pass more logically and naturally along Leeman Road.”

“The freshly submitted plans provide a better solution for access through our site while retaining the transformational benefits of Central Hall, a major part of the Museum’s Vision 2025 strategy to improve its offer and inspire the next generation of engineers and STEM learners”.